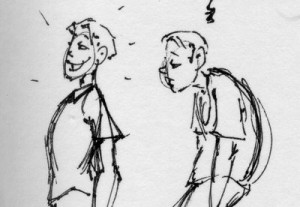 When we think of posture memories normally come flooding back of our teachers and parents telling us to sit up straight.

As life goes by our concerns tend to be more aesthetic. No-one wants to have that “hunchback” look about the way they stand and move. And of course no ones wants to deal with the neck and shoulder pain, mid back tension, headaches and other aches and pains caused by poor posture and spine position.

While the effects that poor posture has on our muscles and joints are well documented, what is not as well understood by most is how posture affects the brain and nervous system, or how your chiropractor can help!

We are the only animals with fully developed frontal lobes and to have mastered upright bipedal posture and gait. It has been theorized that the explosion in brain development was largely a consequence of the complex wiring required to master this task. Furthermore, it is now thought that is was the frequency of neuronal firing associated with upright posture that connected all parts of the brain together giving us a seamless perception of the world  and consciousness. To take this all just that one step further, it appears that one of the best measures of cognitive and mental decline is actually postural decline.

Yep that is right, your posture is the first window into the state of your nervous system

A healthy nervous system has the capacity to master the most complicated task of all….get up on two legs and stay there. This has freed up those magnificent hands of ours (with opposing thumbs) to carry on with the multitude of complicated tasks that we take for granted everyday day. The problem these days is that we spend most of our time sitting.  Studies have shown that you are actually smarter when you work standing as opposed to sitting. Probably as a consequence of the increased demands for multi-system neurological integration to keep us upright.

No movement = no neural activation = brain shut down

When joints stop working properly, it is not just the joints and muscles that suffer. There is also corresponding parts of your brain that shut down as well. Your brain’s highest priority is to be able to accurately position where you are in space and it relies on neural activation from moving joints to perform this task. No movement = no neural activation = brain shut down.

Next time you see someone with poor posture think more about what it says about the state of the brain and its ability to perform the most evolved task it was ever designed to do…..GET UP STRAIGHT AGAINST THE FORCES OF GRAVITY. If you want to keep your brain healthy start by looking after your posture.

For more information or to book an appointment, please click here. 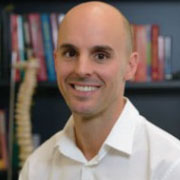